What needs to be done in the code?

If you have any changes to PyPRP that are not in the trunk yet, but you would like to have in the release, please add them to this list, along with a rough estimate of how many weeks it will take you to get it done. Include just the development work in the estimate, not documentation - that will come in a later step. Break independent features down into separate entries as far as possible, and indicate dependencies.

What I imagine to see in this list are finished features from branches that only need to be merged to the trunk, small clean-up work, things that can be brought into beta quality with a small amount of testing, etc. Not big things that haven't even been started yet, that are considered experimental, or that would take a lot of development effort. This is not a wish list, an entry is only made by the person who is willing and able to complete it in the course of a few weeks. I imagine that the list should turn out fairly short, because most things waiting to be released are in the trunk already.

If you are not sure whether your modifications should be integrated into the release or not and would like to discuss this, please indicate so. I personally don't feel qualified to judge the release-worthiness of new features on my own and I hope in such cases a decision can be reached by peer-review from Plasma experts.

Also, if you know about anything that is in the trunk, but should not stay there (because it is unfinished and breaks something, or for whatever reason), please list that here too.

Below is a list of changes in the trunk since the 1.5 release, gathered from Subversion. Please review and flesh out the entries about your changes according to the following guidelines. The main part of this step consists of writing documentation for all the new and changed features. When everything is done, I will transform this into the official "What's New" list to be included in the release (and displayed on its own wiki page).

Hope that is enough explanation to allow us to get this done in an orderly manner. Questions and suggestions are welcome as usual. 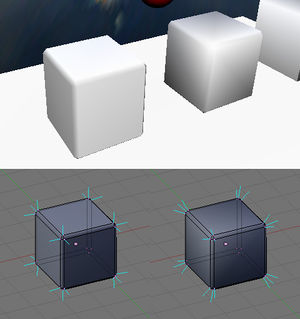 By default, exporting the mesh shown at the bottom of the image results in the look at the top right of the image: the large faces of the cube are shaded as if they were strongly curved. Enabling normal recomputation on an object, on the other hand, results in the look at the top left, much improving the appearance of objects that are supposed to have large flat faces and rounded edges (simulated by narrow bevel faces).

To enable this feature on an object, either add a logic property to the object of type String, named renormal, with value areaweighted, as shown here,

Background: To compute the vertex normals that are then exported by PyPRP and control the shading in Uru, Blender takes the average of the (real) normals of all adjacent faces of the vertex. This is what is shown at the bottom right of the image. In some situations, choosing different normals, as shown at the bottom left of the image, leads to better results. Unfortunately, Blender doesn't allow the user to modify the vertex normals, it just computes them using its fixed average rule. Therefore, the only way to achieve normals as on the left side is to do it in the export plugin which is free to export different normals than Blender tells it to. This is what PyPRP does when the renormal property is set. When set to areaweighted (the only currently implemented option), it averages the normals of the adjacent faces of a vertex as well, but weighted by the face area. This has the effect that large faces have a strong influence on the vertex normals, pulling them towards their real surface normals and therefore appearing flatter, while small faces have little influence and appear more curved.

In the past, if you had associated modifiers to your Blender meshes, PyPRP would ignore them and still export the unmodified mesh. To have modifiers applied, you needed to save the document, choose Apply on each modifier to bake it into the mesh, export, and revert to the saved state to get the nondestructive modifiers back. Now, PyPRP does that for you â€“ for all objects that have modifiers, the modified mesh is exported.

Examples of useful modifiers are EdgeSplit to get sharp edges and Array for repeated objects. Keep in mind however that many modifiers make the mesh more complex and thereby reduce performance in Uru, just as if you had modeled the more complex mesh by hand. In particular, the Subsurf modifier can generate a very large number of faces, so don't go overboard with it, as tempting as it may seem to smooth your objects.

Supposed to make a single footstep region trigger multiple footstep sounds, although I am not sure why anyone would want that. According to the comment in the code (the "specs" mentioned) this should be done by appending "each command after the first". The old version did not do that. For every surface in the list it wrote: "append: false". The new version writes "append: true" except for the first surface, but this makes no difference. Still only the first footstep sound plays.

It is possible to flag a layer as being part of a lightmap (in blender, this is done by pressing the "Amb" button in the material "Map To" panel). When Cyan uses lightmaps, these layers are placed in the "piggybacks" list, rather than in the main layers list (see "Material #350_Inwall_LIGHTMAPGEN" in "Ahnonay_District_LinkRoom"). PyPRP now duplicates that behavior. Judging from preliminary research, it seems to have the effect that only the texture of the lightmap layer is multiplied to the texturing and lighting from the lower layers, while for normal multiplicative layers also the lighting contributions (e.g. diffuse + preshade * vertex color) are evaluated again and multiplied to the result. Since PyPRP sets the same layer colors (runtime, preshade, ambient, specular) on all layers, these contributions end up squared in the result, darkening the image compared to the piggyback lightmap case.